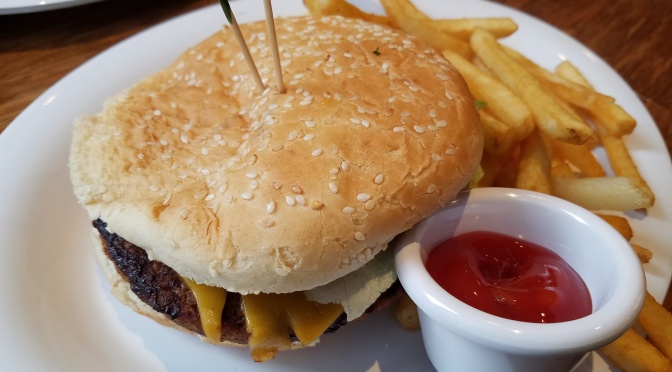 Well, it finally happened.  I was able to sink my teeth into the newest, and possibly most anticipated vegan food item in a long time. Beyond Meat has been releasing their new product, the Beyond Burger in limited Whole Foods stores across the country (yet to be found in the PNW, sadly).

But Veggie Grill worked out a special deal with Beyond Meat and have included it in their new Winter Menu.  We made a bee line for the closest VG (downtown Portland) and raced in from the car. 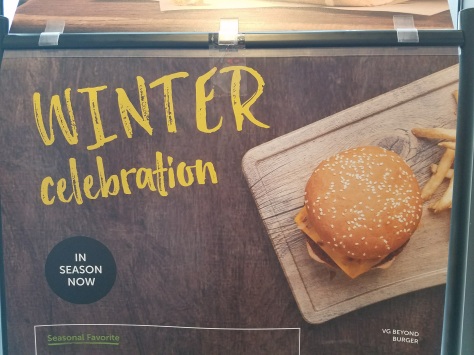 First things first, the second I walked into the place it smelled different.  Veggie Grill never really had a “smell” (Like Subway, Burger King, or Abercrombie).  But now, they did.  It literally smelled like a Burger King in there.  I wasn’t, and am still not, sure it is a good thing. 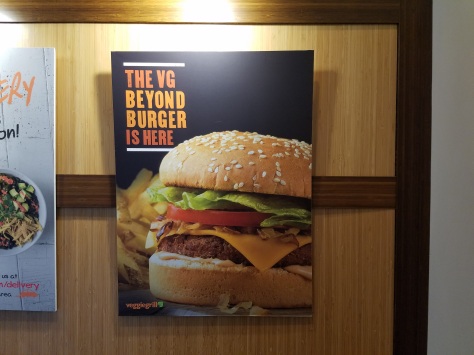 We ordered two burgers, and the employee said that was the only thing they had been selling all day.

When the burgers finally arrived, I was amazed with what I saw.  It literally looked like the messy not-in-the-picture experience I had not had from the BKs and McD’s of my distant past.  The bun was sliding off, and was misshapen (nothing to do with Beyond Meat, BTW, more a testament to how quickly these are flying out of  the VG kitchens).

Melted cheese, ketchup, and thousand island dressing oozed out in places.  Even the french fries were different – I think VG pulled a fast food copy cat trick on us.

I know the vegan camps are divided here – do companies make super meat-like products to help people “transition” from meat, or do they create products for people that are vegan because they don’t like – or don’t want – to recreate the meat experience?   It’s the vegan equivalent of the uncanny valley (the hypothesis that human replicas that appear almost, but not exactly, like real human beings elicit feelings of eeriness and revulsion).

As an ex-meat eater and a person that likes to share vegan food on the trail with decidedly un-vegan friends, products like this excite me.  Personally, they ABSOLUTELY nailed this.  The burger was flavorful, somewhat meaty, and was just a perfect vegan throwback to my teen days of cramming five friends into a fast food booth.  I wonder if VG will be releasing little ketchup packets to further the experience.

But when you look at the nutritional facts on these, they really aren’t bad.  The ingredients are pretty natural.  And look at the below infographic I stole from their website.  Pretty damn compelling if you ask me.

The thing that excited the most with this product isn’t necessarily the fast food experience, although that is a vanity that will wear off.  It isn’t the beet juice that “bleeds” or the meaty texture.  It’s the Summer.  I cannot wait to bring these to cookouts and have my own as well, and place them on a hot grill.   I am really excited for that.

The only down side to this product in my opinion is the in-store placement.  Beyond Meat is selling this product in the meat section.  And I get it – a lot of people will not shop the frozen “Vegan/Vegetarian” freezer section at the store.  But every time I am at Whole Foods, I now need to browse the dead carcass parts while seeing if they are in stock. I am once again in the meat aisle, a place I have not been in a decade.  And it is pretty gross.  We’ll see how this plays for Beyond Meat.

In the end, it is an amazing product, and one that will do a lot to further veganism and meatless cookouts.  They NAILED it and I am really looking forward to this Summer!