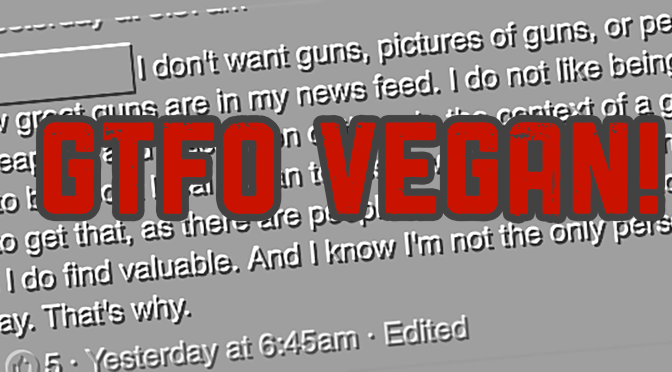 I remember when I lived in Alaska and was a meat eater.  The whole concept of “veganism” was an odd one – a stereotype of skinny, pasty, punk kids sitting in a drum circle eating lettuce and gravel.  They were angry at the world,and irrational. I never took the time to meet or understand vegans, so my irrational vice held.  That is of course, until I gave away all the meat and fish in my freezer and became an Alaskan vegan myself.

I soon realized the error of my ways.

I proudly wore my veganism on my sleeve, even in a state that was less than accepting of my choices.  I ate the modified Black Bear burritos at Bear’s Tooth.  Browsed the over prices aisles at Natural Pantry.  I held animal rights rallies and held the flag high.

But never would I ever expect to be ostracized within my own community, even in Portland.  A Portland that likes to keep things weird. Keep things different.

I updated one of the most popular posts on this blog, the article on Finding a Vegan Concealed Carry Holster in the Portland Vegans group. 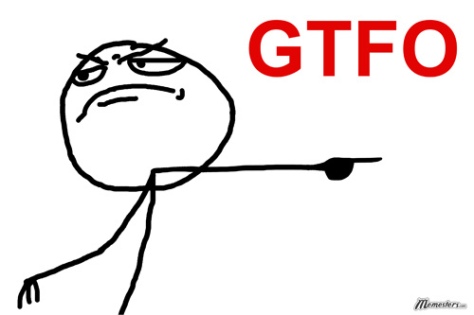 The backlash was swift and immediate (although I was VERY happy and surprised with the amount of support from fellow Vegan gun owners).  It seemed I had struck a nerve that fell outside the comfort zone of the drum circle.

Suddenly the impression of angry, out of touch vegans from my early days came creeping back.

Here is a sample:

And that is when I realized the core irony facing modern veganism today:  If you do not fit a vegan stereotype, you may not be accepted by the vegan community.  You will be asked to GTFO.

This means a couple of troubling things. First, the goal of any vegan should be to spread and share veganism to as many people as possible.  And they best way to do that, is of course to be open, understanding, and approachable.

Second, why does someone else’s morality need to align perfectly to yours in an effort to have a conversation?  Basically if fellow vegans attack a fellow vegan like this, how will they ever be approachable to non-vegans?  If we cannot in any way, look past the vegan that target shoots, how will vegans look past the meat-eater that just polished off a steak and eggs breakfast at Cracker Barrel?

The Vegan Bros have a great approach in the recent article on Grist, titled “The Case for Imperfect Veganism:”

“The [vegan] stereotype of the past was maybe someone more hippie, feminine —”

“But nowadays, it’s a cross-section of society where you have police officers, military, investment bankers, pilots —”

“— people who go to church every single Sunday! Now it fits everyone.”

The Bros take an inclusive approach to veganism: “We cast a big tent, and the goal is to bring people in. [We don’t] define vegan in this very stringent, hardcore way that is inaccessible to people.”

Which of course, is amazing.  But the core vegan community needs to be prepared for it.

I am also a verbal supporter of marriage equality.  And I never could fathom the bakeries, photographers, and florists that declined same-sex couples because of their sexual orientation.  I never understood how someone’s morality clouded their view of another person.

Well, after this week I know how that feels.  And it’s eerie.  And it’s maddening.  To be shut out, asked to leave, and ostracized for my own personal, yet vegan, lifestyle.

Another interesting takeaway was that while I was able to change my own perceptions of vegans (from my early stereotypes), many vegans are not willing to change their perceptions of gun owners.  We are not all crazy, wack-o rednecks jacking deer and chugging Mountain Dew.  Whenever I am shooting, I meet people from all walks of life. Doctors, stay at home moms, and now vegans.

In the end, we are all just people making what we hope are the right, just, ethical decisions.  I hope the vegan community is ready for veganism to go mainstream – because we are there.  And they may not like it.

5 thoughts on “The Case for Open Veganism”