Check out my latest video project from the Rubicon trail last August!

Special thanks to Beyond Meat for their support!

Let me start this off with me saying I was a meat eater.

I remember going to a wholesale club in Massachusetts, where there were ham steaks (big ones, too) on a sort of tape.  They were vacuum sealed and perforated between each one.  They came off a huge spool in a cardboard box.  Once you had the quantity you wanted, you simply tore off the last one, and tossed them in your cart.

It was only later that I realized those pig slices were probably like some sort of cross-section of the same animal.  At least for 4 or 5 of the steaks.  It was actually really gross.

I bring this up, as it was probably my first epiphany about what I am actually eating.  Growing up, we are told that meat is an important part of your diet, and that beef is “what’s for dinner.”  Of course I didn’t stop eating meat because of that realization, but it was the first of many small moments that finally ended with me being vegan.

The meat and dairy industries spend immense budgets on establishing the “black box” approach to meat.  Their labels have pastoral farm imagery, and catchy phrases like “Smithfield Farms” and even extensive rebranding efforts on the names of cuts.  This is, of course a huge lie being fed to Americans.  There is no “farm” in the  animal industrial complex.  The days of the local farmer, humanely raising and caring for livestock are sadly close to an end.

END_OF_DOCUMENT_TOKEN_TO_BE_REPLACED

On a recent trip back to Boston, I was lucky enough to stop by the Red Lentil Cafe in Watertown.  The restaurant was popular and highly rated on HappyCow so I parked on Auburn Street, and headed in for dinner. 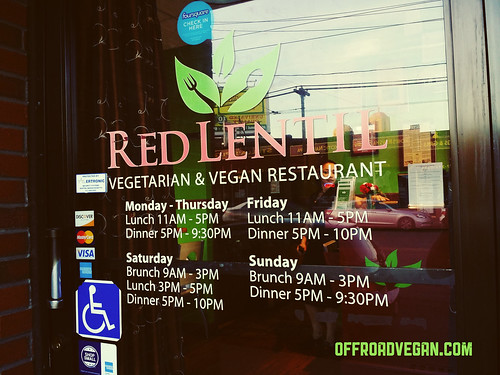 The space was very bright, clean, and well laid out.  I was happily surprised at how busy it was.  The tables were set up mostly for couples which lent a nice ambiance to the place, and the bright colors complimented the friendly service.

END_OF_DOCUMENT_TOKEN_TO_BE_REPLACED

I have always heard about this mythical place called Sand Lake, but never really wanted to go there.  Maybe it’s the name.  A lake of sand doesn’t necessarily sound appealing.  But when I had an invite from a couple of Jeep friends to camp for the weekend, I took the chance.

Sand Lake is a recreation area just South of Tillamook on the Oregon Coast.  Getting there is a cinch and it is nice to pass Brown’s Camp should the desire for another type of wheeling strike you on your way home.

I headed toward “Derrick Road” where I would eventually meet my friends and set up camp.  The road ends at the camp area, a small sandy (surprise!) enclave of trees with primitive campsites, fire rings, and pit toilets.  The end of the camp area is basically the entrance to the recreation area.

Once my friends arrived, we aired down and headed out to explore this expansive play area.