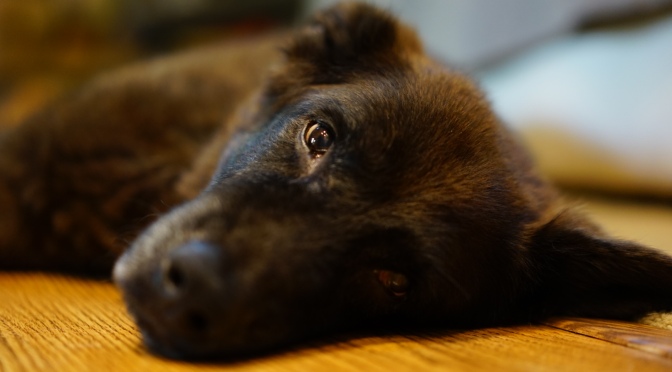 About fourteen and a half years ago (almost to the date) I turned my Jeep around in the middle of a busy Boulder, Colorado intersection.  It was a literal U-Turn in the purest sense of the word.  As I floored my Jeep, I raced back hoping he was still there.  This little brown chocolate lab mix, at the time, named MacGuyver.  He was at the Boulder Humane Society and we thought it was best to “wait” after meeting this sweet little pup.  Five minutes after leaving the lot and we were headed back to pick him up.  So fast, and deep was the connection with this truly beautiful spirit.

After a quick rename to Cooper (aptly after a Cooper Tires sign after leaving the humane society the second time, with the dog in the Jeep) he was home and making himself a permanent part of my life.

From those early days, we spent it tubing Boulder Creek and hiking the Flatirons.  We camped in the Colorado backcountry.  Roadtripped to Iowa countless times.  He was a constant companion on trips through Wyoming, and growled at bison through Yellowstone.  He tagged along on my very first Jeep trips in Colorado.

Cooper was the epitome of the Jeep Dog.

After Colorado, Cooper was in the back of my Jeep once again, this time pointed North.  As we drove to Alaska in the dead of Winter.  He was snuck into hotels in Calgary, Alberta…and B&Bs in the Yukon Territory.  He experienced -30 in Whitehorse, and tap danced across the seriously cold, frozen parking lot.

In Alaska, Cooper had many adventures.  From camping trips in the Girdwood backcountry (and his less than favorite rides in the hand tram across Winner Creek), to trans-Alaska drives on the Denali Highway and to Seward and Homer.  Probably his favorite place – Glacier Creek in Girdwood – was visited many times by Coop, his paws indelibly pressed into the dark glacial silt forever.

It was also in Alaska that Cooper met the wonders of a porcupine.  And my friend Nate had to carry him down the mountain while I tried reaching a vet.  We both learned a lot that day.

After many cold winters and buggy Summers, Cooper tagged along with a move to New England, and another infamous trip through Canada and the US.  In Vermont, Cooper explored the Green Mountains, especially the Robert Frost nature trails in Ripton.  While New England was great, we were off to Alaska again, and Cooper hopped up into the car and willingly tagged along back through half the World and ended up in Anchorage.

After a handful of years, Cooper was on the move.  This time being slid into the belly of an airplane on his way to Honolulu.  Cooper would shed his Winter coat for his Aloha fur.  He spent weekends on the beach in Kailua, and hiked Wa’ahila ridge, the Ko’olau mountains, and countless other spots on Oahu.  While in Hawaii, I found out what a kind spirit he really is – I found a baby bird and brought it home. While living in a tiny box, Cooper never left the bird’s side.  He would always come running at the slightest chirp.

After the tropics, Cooper was once again crammed into a Jet – this time pointed at Florida.  After leaving the Orlando airport, he was starving and I had no dog food handy.  This would be his first Taco Bell experience (and only, if my memory serves).  After wolfing down a couple of plain steak burritos, we were on our way to a sweaty year in Florida.  Cooper walked through Fort Lauderdale and Melbourne, enjoying places like Wickham Park.

One of his final major moves, this time was a road trip to Portland, Oregon.  It would be here that he would spend a lot of his days, shaking off the winter drizzle on Mt. Tabor or patiently waiting while I ran into a coffee shop on Alberta.  He spent many days on the Oregon Coast – possibly his second favorite spot – in Cannon Beach and Neskowin.

And it would be Oregon that would be his final home.

And it would be Oregon where his calm, consistent presence guided me through a divorce.  Where he would jump in the back of the Jeep on a hot summer day to swim in the Salmon River.  It would be here where Cooper would befriend my newborn Son, Wilder, and be his first friend.

And, sadly, this would be his end of the road.  But what an amazing road he has had.  Cooper has lived the life of a wanderer – where he ran on beaches and snowfields.  Where he growled at moose in Alaska, and chased waves in Hawaii.

I will miss his constant presence.  His ability to make anywhere feel like home – whether some random hotel room, a tent in the woods, or my first house.  He was always there.  Always greeted me at the door.  And all he asked for was a bowl of food, fresh water, and the random adventure into the woods.

If heaven is real, Cooper, I hope you are there, waiting for me.

I promise to take you for a walk. 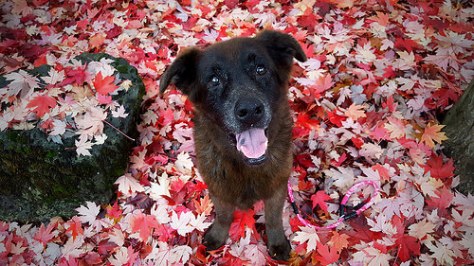 3 thoughts on “A True Friend, Indeed”