It is often said in religious circles that “When God closes a door, he opens a window.”  The vegan scene has had a few doors closing as of late, with Portland staples like Portobello shutting their doors.   But, the vegan heavens soon burst open a giant window upon us all. And it is tremendous. 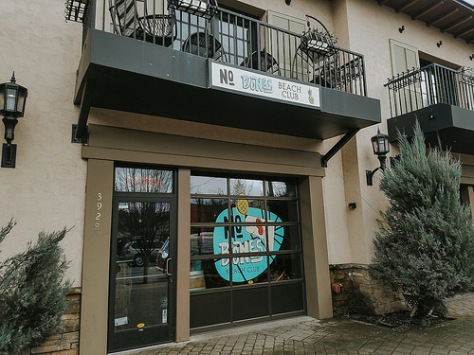 We weren’t sure that they were even open, and after some internet sleuthing we decided to just drive by.  We saw the glowing OPEN sign, high-fived, and parked with a quickness.

Walking into the No Bones Beach Club, the decor was a great mix of Waikiki dive bar, and Pier 1 imports.  The bamboo, tiki masks, and surfing elements reassured you this was, in fact, a tiki bar first and vegan joint second.  There was no mention anywhere of it’s vegan roots which I get, and actually appreciate.

The bar was front and center with TVs, a pretty large seating area, and more seating upstairs.  The place is spacious, well designed (I love the colorful sheetmetal wall), and open.  Upstairs they have a small “Tiki Hut” that is available to rent for a small fee and is the only reservable spot.

The service was super warm and made us feel comfortable.  Even though we caught them on a soft open, they seemed experienced, knowledgeable, and at home.  They happily accommodated our 18 month old with a cool pineapple sippy cup and a high chair.

The first choices were on cocktails and I asked our server to just surprise me. She inquired about my love for mojitos and I happily confirmed.  Kristin ordered the Beach Thyme which was a coconut-based tropical drink.  I have never had a mojito in Cuba, but certainly many in various tropical spots (think Hawaii, Singapore, and of course Florida).  I have to put this mojito right up there with one of the best.  The mint was great, the sugar not overpowering, and it was just a great drink.  The Beach Thyme was also really good, albeit a bit different with the coconut milk base.  As far as a winter tropical drink goes, it was perfect.

Next came the appetizers. The Buffalo Cauliflower “wings” (quotes are mine) were absolutely amazing, as was the ranch on the side.  Perfect amount of heat (which for me is minimal), and tremendously fried to crispy perfection.

The nachos were a great surprise and I have to tell you, some of the best I have had.  The cashew cheese is ridiculous, and the chips themselves seemed almost like won ton wrappers…in strips.  Hard to describe, but amazing to stuff in your face.  Some may appreciate the fresh jalapenos, but this New England-born kid kept them on a side plate, lest they drop a seed somewhere unexpectedly.

The last app we sampled were the  Eggplant Fries.  Like a bad vegan, I hate eggplant but the fry I did have was perfectly fried and had a great flavor (as did the side of poblano ranch).  These all came home for later.

I was so overcome with the immature excitement of a new vegan establishment of this caliber, I forgot to consider the menu for my actual lunch.  No, we had not yet ordered lunch.  Yes, I was being an absolute fat ass.  Anyway, continuing.

Kristin ordered the Crab Cake Benedict, with crab cake made of parsnips – f’ing PARSNIPS!  I popped on the Mango and Blueberry stuffed French Toast (I know this is a shocker, but I held the jalapeno syrup and went with good ol’ fashioned maple syrup).

I know some may think I am being over the top here, but I honestly mean this.  Like to the core of my being.  This was, hands down, the absolute best french toast I have ever had in my entire life.  Period.  It was absolute perfection.  I’d write about the fluffy bread, the delicious fruit, and all the other stuff, but I am just going to leave it at that.  It was just that good.  Period.  Done.

The crab cake Benedict came out and was presented beautifully.  The garnishes, color, and overall design of this plate was impressive.  When I was able to finally taste it (I admit I was a little leery of parsnip-based crab), it literally blew me away. As far as a savory dish is concerned it was awesome.  I think the word “stupid” came out my mouth. It was that good.  I actually ran out of positive words and ended up repurposing negative words.   It was like infinity had wrapped back on itself.  The food was stupid good.

I also think it’s awesome they choose smaller non-profits and feature one each month, sharing a percentage of sales with that organization.

So I need to say something here after our experience today.  When I think about the cool decor, the awesome service, and the stupid food….No Bones beach Club is THE best vegan food right now in Portland.  And I don’t just make claims like that.  It really is.  Absolutely without a doubt.

You need to go there right now.  Order some amazing drinks, toss back some buffalo cauli, and just soak up the awesomeness of the place.

It’s tremendous.  No bones about it.