In a recent Facebook vegan group, someone asked, “If McDonald’s came out with a vegan burger, would you eat it?”  The responses were pretty much split down the middle between “Yes, but only in emergencies” and a resounding “No.”

But I feel the answer is not as black and white as these two ends of the spectrum may lead us to believe, so I wanted to share my thoughts based this “damned if we do, damned if we don’t” conundrum. 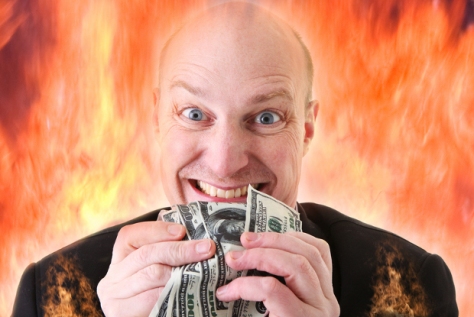 1. Fast Food empires are evil corporations that exploit animals (and people/environment) for profit.

This is, sadly very very true.  However, as corporations, the only language they  speak is dollars.  So to have a say at the table, vegans must pay to play.  By voting with our wallets and supporting chains that offer vegan options, we are proving to them that vegans are a substantial portion of their audience.  Even one vegan item at a place like McDonalds can translate into millions of animals saved per year, as a result of reduced meat consumption.

This could turn into a win for the animals and for us.

2. This would be convenient for the vegan community when traveling/roadtripping/etc.

Score one for the vegans!  I can attest to this very fact as we travel quite a bit.  While probably not the healthiest option, I always can find a Taco Bell somewhere for a seven-layer burrito fresco style.   This is essentially beans, rice, lettuce, toms, and the damn tortilla.  It is not a fresh, organic salad (it’s probably full of GMOs) but it is also not a box of Clif Bars or other vegan standbys.  If more places offer vegan options, driving through places like Burley, Idaho would not be as difficult.

Some people that responded claimed it was a lack of proper planning that resulted in a need for vegan fast food.  And this is true.  But constantly planning is also tiring and sometimes it is just nice to pull up to the little window and get a bag of vegan burritos.

3. I don’t trust that the vegan burger wouldn’t be contaminated in the kitchen/on the grill.

This is probably the one thing that would totally weird me out. Just like it is hard to come out of a hospital and not be sick, it’s hard for a vegan patty to make it out of a place like McDonald’s without some animal residue on it.

I will say that on many occasions I have asked Taco bell management about their food handling practices and have been pretty impressed. Mostly because of liability with allergens, they have a very robust protocol for handling and avoiding cross contamination.  I would hope that other companies in the future would share that same level of concern.

Any way that we can show the world that veganism is here to stay, is important.  When large chains start carrying, promoting, and selling vegan burgers, people will start to hear more and more about veganism and will perhaps give it a shot.  Not all vegans eat salad and rice for dinner, and it is important to appeal to all diet types in order for veganism to be widely accepted.

In the end, we do not need to eat at these places every day.  Whether road tripping, working through lunch, or just seeking a sinful dinner, vegan fast food options can be a good thing.

Personally, any way we can get veganism into the mainstream will only help to further our cause and help educate others on the reality of vegans and veganism.

We can also show companies that our market share is growing, and we will soon be a force to be reckoned with.

Help answer the question.  Would YOU eat a vegan burger if sold at major fast food chains like McDonalds, Wendy’s or Burger King?