One of my favorite things when traveling for work is to hit up the ol’ Happy Cow app and see where fate and GPS lead me.  Tonight they both conspired to land me in Capitol Hill in Seattle, off bustling Broadway, and to the steps of Highline Bar. 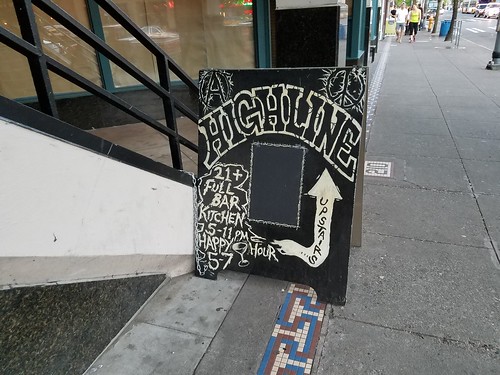 Highline Bar is 100% vegan and a combination of divey/velour/video game chic and hipster heaven.  So I parallel parked the Jeep on the curb and walked in with my famous “BAN IDIOTS NOT GUNS” t- shirt and ordered a Boneyard IPA.

Their  menu is pretty awesome and is made up mostly of housemade seitan.  Which to me is pretty rad for a couple reasons.  First, it’s hard to fuck up seitan, and it’s easy to make something unique.  Second, I am sick of all the Gardein-based stuff out there. 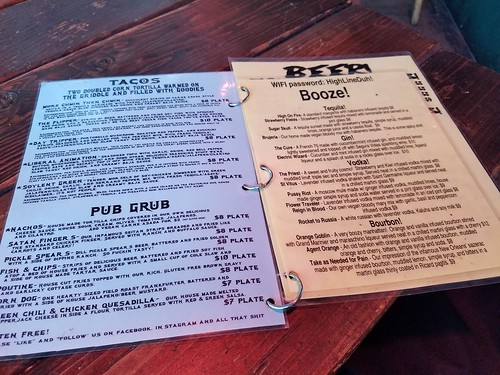 The menu has items listed like the “Reubender” which sounds like a pretty awesome Reuben sammy, and the “Pig Destroyer” which I ordered.  It is a take on the pulled pork BBQ sandwich, but made with seitan – something I have never had before.  They also have vegan fish sandwiches, BLTs, lots of taco options, and general “pub grub” which features things like nachos, seitan fingers, poutine, and corn dogs.

The bar itself is definitely in throwback mode.  There is a lot of red lighting, velvet wall hangings and gothic/hipster calligraphy peppered around the joint.  I can imagine this place more as a biker bar in Cleveland than a vegan dive in Seattle, but it works.  Lots of guys have long hair, skinny jeans, and I am pretty sure I heard some Motley Crue on the stereo.  There is a huge stage for shows. 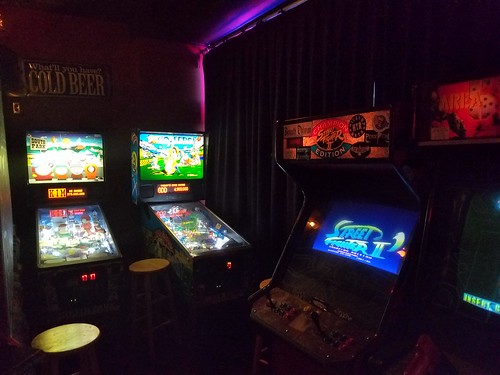 The outdoor seating was a welcome sight with plenty of people watching down below.    I soon realized the error of my ways as more and more people starting lighting up around me.  And it wasn’t all tobacco.  I ended up moving inside to have my dessert.

The service was friendly and prompt with the bartender helping me with my selection for dinner.  There is just enough friendliness to counter the occasional hipster-rage singing of the requisite 80s rock song choruses, that it all works out.  I bet it gets hella rowdy as the clock wears on and the booze soaks in.

They also have a pretty decent tap selection but I was surprised to not see more local beers represented.  The cocktail list is impressive and, had I Ubered it here, would imbibe a bit more. 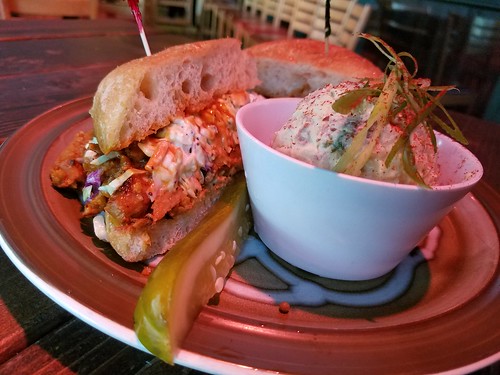 The Pig Destroyer was super good.  While they said it was housemade seitan, it looked like soy curls…but I could just be confused.  Also, and I may be nuts, something on the sandwich had a fishy flavor to it.  It worked, and was good, but was noticeable.  Almost like they used vegan tartar sauce and not mayo.  Or, maybe I am nuts.  The side of potato salad was deelish.

Now let’s talk desserts.  I am not a huge dessert guy.  But I decided what the heck, and pulled the trigger on their special dessert – the Dropdead.  It was made up of 2 deep, coconut-fried oreo cookies split with a scoop of vanilla soy ice cream and drizzled with salted caramel.  It was quite possibly the best vegan dessert I have ever had.  It was that good.

Overall, this place was a lot of fun.  Good people watching, mediocre parking, and hearty food.  Be sure to check out the Highline next time you are in Seattle!