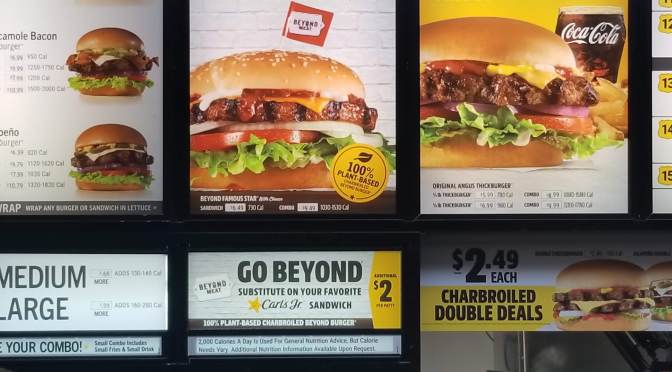 We all heard the news on Instagram at about the same time, and I think the collective vegan mind imploded.  It seems that Beyond Meat and Carl’s Jr. teamed up behind closed doors to surprise the heck out of just about everyone.

It wasn’t one of those lame media teasers, where a major brand was testing some new vegan option at one or two stores, this was NATIONWIDE.  Today.  Every. Carl’s Jr.

So I did what any self-respecting vegan would do – drove my happy butt to a Gresham, Oregon Carl’s Jr. and ordered a burger.

A sign right next to the front door proclaimed that the Beyond Burger was now an option.  All the staff inside we showing off Beyond Burger shirts and hoodies (I tried to beg for one, but no dice).  Everyone seemed knowledgeable about the new vegan options (at least how to make it vegan).

It was odd (albeit nostalgic) to be sitting in a fast food restaurant waiting on a burger and fries.  It has been at least 10 years, if not more, since I had done that.  So there was a strange feeling about sitting there ordering burgers and fries.  It was cool.

Roadtrips will never be the same.  We can pull into a seedy Omaha truck stop, and have a vegan burger.  Coming home late from work and picking up dinner will also be changed.

The staff’s understanding of veganism as a whole was severely lacking.  Now, don’t get me wrong, I am not looking a “gift horse in the mouth (to use a truly vegan colloquialism) ” but these guys seriously had NO CLUE.

When asking about the cheese, I was told it was not vegan, as it had SOY in it.  But that because it was pasteurized, it was all fake anyway, and no dairy.  That aside from the soy, it was vegan.  We couldn’t believe it!  So we ordered it with this new “vegan” cheese option.  Thankfully the woman ran out from the back, in time to change our order, alerting to us the cheese was in fact NOT vegan.

Then we debated about what fries were and were not vegan.  So, I hope the grunts at Carl’s Jr are prepared for the onslaught of pissed off vegans asking questions and expecting answers.

I think we all knew this was coming.  But they DO NOT use a special area to cook these burgers.  They get cooked right where all the beef also gets cooked.

The only reason I went ahead with my order is this.  They are only cooked on the “charbroiler.”  They invited me back to look at this contraption.  It is a wire mesh belt that feeds the burgers from one end through to the other.  Like a giant pizza oven. So the only shared cooking surface is a tiny amount of wire mesh.  Oh, and by the way, that mesh passes through that machine at over 750 degrees.  So I can only hope/assume that any meat residues are blasted and cooked off.

I know the vegan committee might dock me some points here.

The fact I went to a Carl’s Jr. and ordered a burger and fries, and enjoyed a vegan meal is, in itself, remarkable.  it speaks to how far veganism has come, how much the market has changed, and how the perception of veganism has also progressed in mainstream society.

I praise any company that has been historically a meat-offering establishment and is willing to try something along these lines.  It is a bold move, and one that can have massive positive repercussions for animals, fellow vegans, and even meat eaters.

But there are two schools of vegans.  The first is an ultra-emotional, almost fascist approach where anything that deviates from this oft-unattainable vegan god-like status, is not a vegan.  They will shun anyone that walks into a business that sells any meat, regardless of how that company is possibly changing.  They will boycott Beyond Meat.  They will shame vegans on Facebook groups that even think about supporting a fast food chain.

The other group is a little more progressive in thought.  They see the bigger picture.  That sometimes you need to take two steps backward to take one forward.  Sometimes you must give your money to big, evil companies in order to show how popular vegan options are, with the only goal of showing other large companies that vegans are here to stay, and that market share is growing.  In the end, that will benefit the animals.

If you find yourself in the latter group, head down to a local Carl’s Jr.  Get the Beyond Famous Star Burger (but hold the cheese and mayo).  You’ll be glad you did.

If you are in the first group, well…maybe there is a drum circle somewhere for your rage.

2 thoughts on “Beyond Burgers at Carl’s Jr!”