It’s always exciting when you hear about a new vegan place in Portland.  Especially with what seems like so many deciding to close their doors.

So yesterday, on a whim I ended up pointing the truck toward SE Belmont, and dropping in on Fatsquatch PDX.

The cart is nestled in a small pod on Belmont (Belmont Street Eats), and if you didn’t know it was there, you could possibly walk right past it.  But once in the narrow little alleyway it opens up, with Fatsquatch lurking in the back like its namesake.  Don’t expect covered eating at this pod, however. I had to eat in the truck. 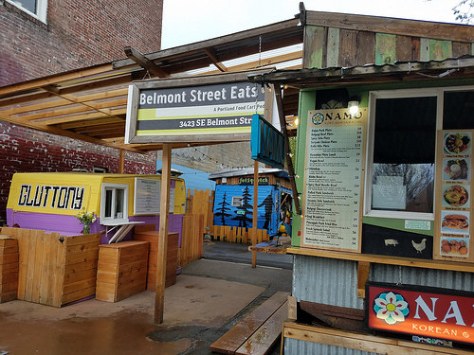 The first thing I noticed was the Vermont license plate and I was all excited, thinking they were fellow 802ers, but alas they are not.  Just the cart itself.

The cart itself has a cool, unique design to it unlike many others.  The menu is handwritten on the front, and is easy to read.  The hardest part was making the choice.

They have options like Deep fried chicken tenders, “Notzarella Sticks,” and pickle chips under the “Deep Fried Delectables” section, and Entrees like The Ozark (BBQ Soy Curls, sweet and spicy slaw, onion, tomato, and chipotle ranch), the Erie (Buffalo curls, cabbage, carrots, onion, etc), and the St. Tommany with cajun curls, black beans, corn salad, cabbage, and ranch) .  Each of the entrees can be ordered as a wrap, a bowl, or a salad, and each option tweaks the formula slightly.  Basically a wrap gets tater salad, bowl gets grits, and a salad adds romaine.

They also seemed to pride themselves on the array of housemade sauces – buffalo, BBQ, ranch, honey mustard, and chipotle ranch.

Specials were taped randomly to the menu board.

I ended up with the Erie as a wrap, and really wanted to try the Nozarella sticks (made with Follow Your Heart cheese).  I knew I would be taking most of it all home, and I did. 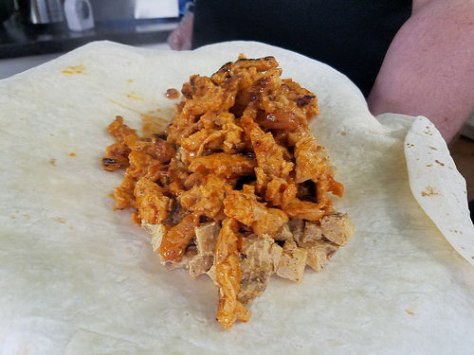 The wrap was ENORMOUS, and ran counter to why I chose a wrap in the first place.  The cubed potatoes in it added almost too much substance, and almost detracted from the buffalo curls.  I think in the future I’ll ask for less potatoes and more curls.  The flavor was mild (which I appreciate).  It was a massive meal. 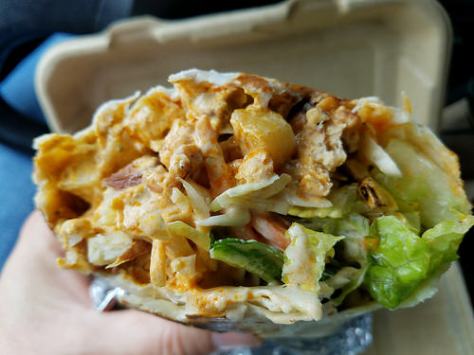 The Nozarella sticks were breaded and served with organic Barilla dipping marinara.   The Follow Your Heart cheese was good, but I am just not a fan.  This is not anything against Fatsquatch, I just don’t personally like FYH.  I’d prefer they try these with Myoko’s mozz (I know it would be pricey), or even cuts off a Daiya block.  Either way, they were OK. My family back home seemed to like them.

The staff was super friendly and I enjoyed chatting with them.  Prices seemed reasonable for the food.

Overall, Fatquatch fills a void in Portland of good, vegan fried chow.  While I wish I could here often, my arteries and waist line disagree with me. However I will visit whenever I am in the area and look forward to trying more of their food!