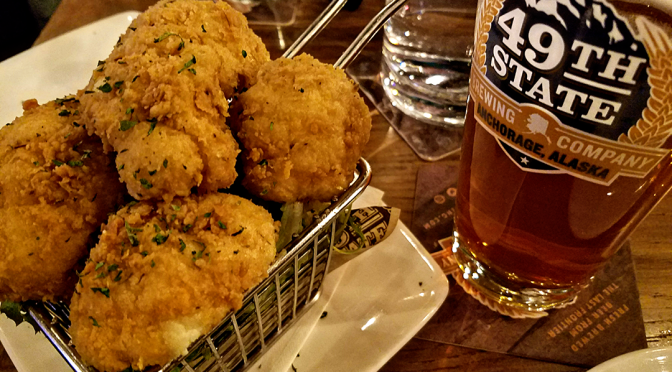 Traveling to Alaska as a vegan can be pretty daunting.  There is hope though, in the sparsely populated vegan options on menus at places like Bear’s Tooth, Middleway Cafe and others.  But you can also get sick of them pretty quickly.

So I decided to join some friends recently on a downtown crawl.

We started the night at 49th State Brewing Company.

The brewery is located in the old Snow Goose space, and they have done an amazing job with the design.  I would have taken more photos, but it was Iditarod weekend and the place was absolutely PACKED.  To the gills.  So apologies for that (you can find some photos on their website).

I grabbed an IPA (Solstice) and it was actually a GREAT IPA.  Not to bash on Alaskan breweries, but I have become a bit of a Portland beer snob.  I was impressed with their beers overall and look forward to more when I go back there. 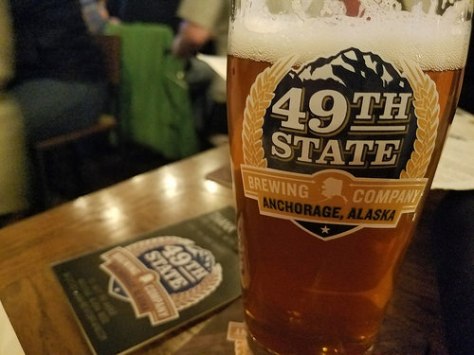 As I was sipping my solstice IPA, I decided to crack open the menu and see what misery was about to unfold before me.  However, I WAS SHOCKED!!!! My non-vegan friends mocked my vegan enthusiasm.  Buffalo cauli!  Avocado fries!? BEYOND MEAT BURGERS!?  Daiya!? What the what!!??  I was in a little frozen vegan paradise in the 907.

I kept scouring the menu for the little icons.  Which, by the way were “vegetarian,” so be sure to clarify with you server (who, by the way was knowledgeable about vegan items, which was nice).

So I ordered the buffalo cauliflower (duh) and decided on the basic burger with the beyond meat Beast Burger.  I was going to consider the pizza with Daiya (called the Vegan Tundra) but I had pizza the night before.

The cauliflower was good – my non-vegan friends liked it too (to my dismay) but be warned, it isn’t served like it is in most Portland places.  It comes with the side of buffalo and you pour it over everything.  Not bad, just different.

The burger arrived not too long after and it was really good.  Basic, but good.  I mean it’s a frickin BEAST BURGER in Anchorage.  I was loving it.  The fries it came with were awesome as well.

The service was super positive also. Friendly servers, accurate orders, and prompt service.  It was nice that one of the managers swung by to check in.  I thanked him for the vegan options.

If you are headed to Alaska, be sure to make a stop at 49th State Brewing Company!