This year’s Rubicon trip would be unlike any other we have ever taken.  Maybe it was the seemingly countless trailer flops.  Or maybe it was the legendary campsite.  Or, the fact we started in Wentworth Springs instead of Loon Lake.

Our journey began at Mt. Hood in Oregon and we made our way through Bend for a lunch stop at Broken Top Bottle Shop and their legendary BBQ Tempeh sandwich. 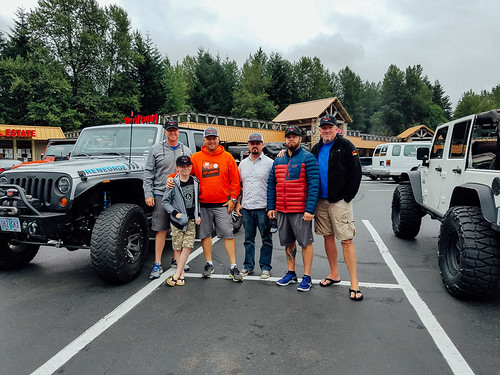 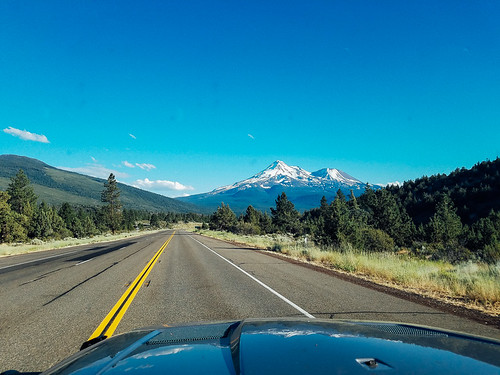 As we made our way down Highway 97 into Weed, California, the sun started to set and the temps dropped from the high 90s to the upper 80s. 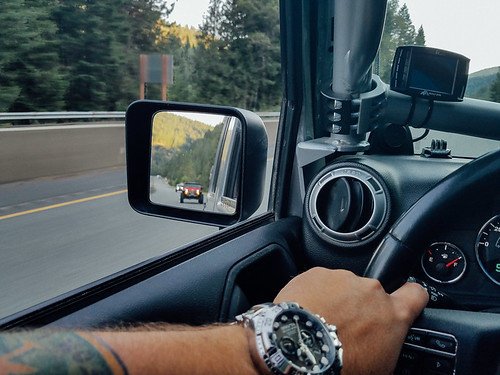 After an overnight in Yuba City, we dropped doors at a sketchy Motel 6 and finished the route to Wentworth Springs. 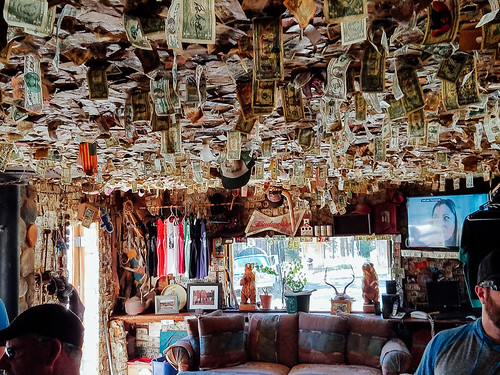 No Rubicon trip is complete without a cold beer at Uncle Tom’s Cabin and leaving your own dollar bill somewhere on the wall.  I stuck an Offroad Vegan dollar on the edge of the bar. 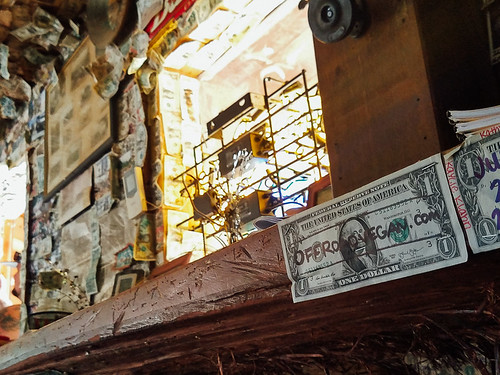 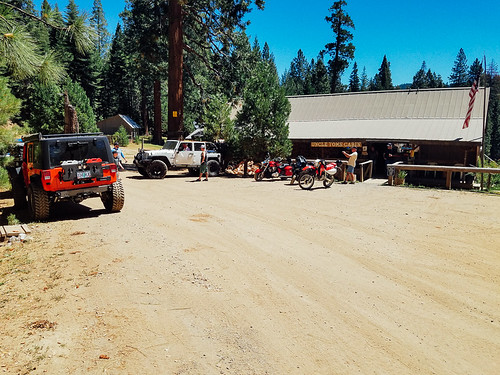 We soon made our way to the Wentworth Springs trailhead, aired down, and prepared for the long arduous trek that lay ahead. 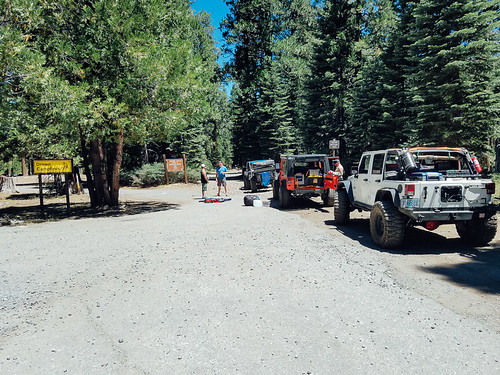 The early part of the trail is pretty easy as opposed to starting at Loon.  It was more overlandish than rock crawling for a while.  There was a new bridge that crossed a river. 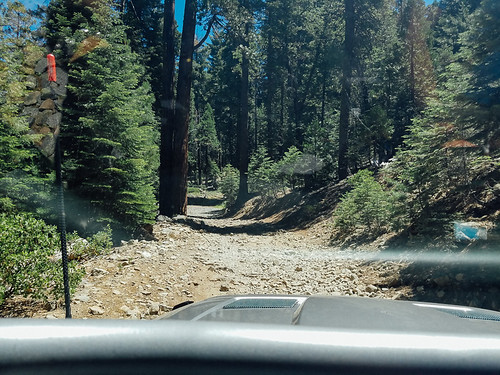 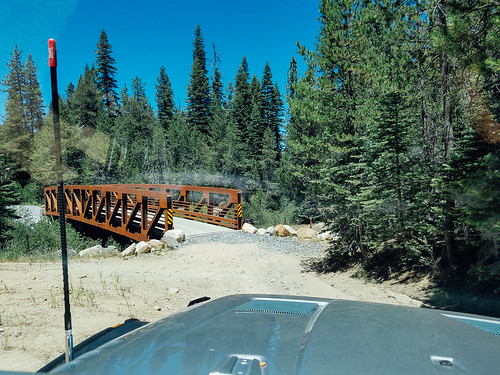 It was a ways until the first obstacle of the trail.  This granite slab was pretty steep but we all scaled it without issue. 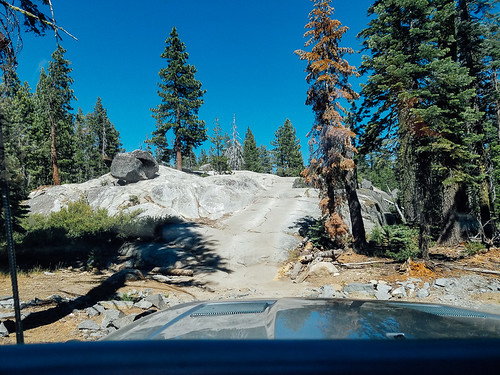 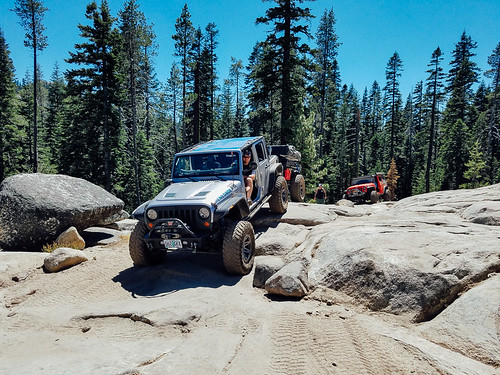 We soon approached Devil’s Postpile, a steep, very rocky and bouldery climb that seemed to go on forever.  It was a lot of fun, and even with the trailer, was scaled easily with some good spotting. 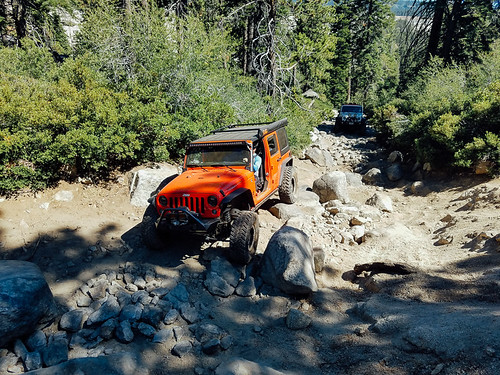 We continued to find short, steep climbs and loose rock as we made our way toward the Loon Lake intersection. 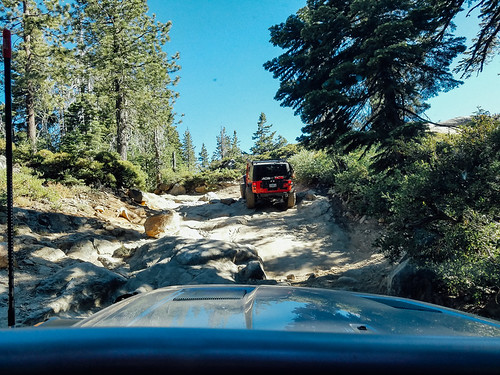 We soon came to the little sluice and I decided to drag my trailer up it.  Being dry, I really had no issues. 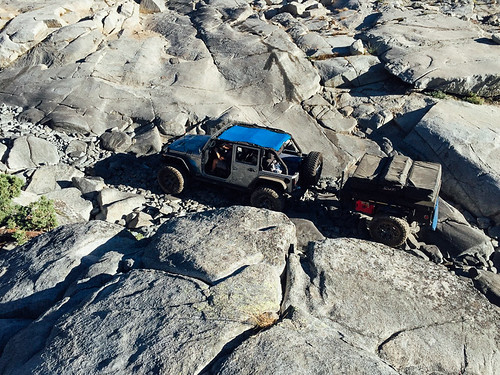 The trailer handled the trail perfectly, until we began descending into the Buck Island Lake basin.  As we dropped down from the ridge, we were all tired and rushing.  I miscalculated an angled drop, and the M416 could not keep it level.  It tipped over pretty good but sustained no damage. 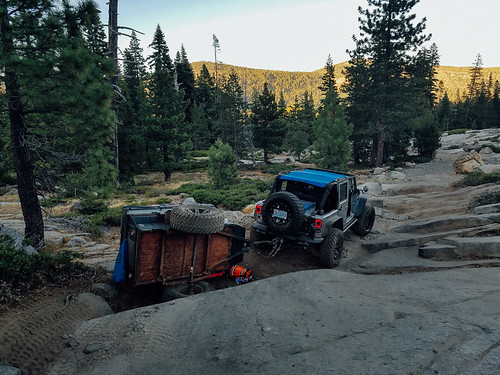 Just before the lake, we all got to flex out our suspensions on the bowl rock. 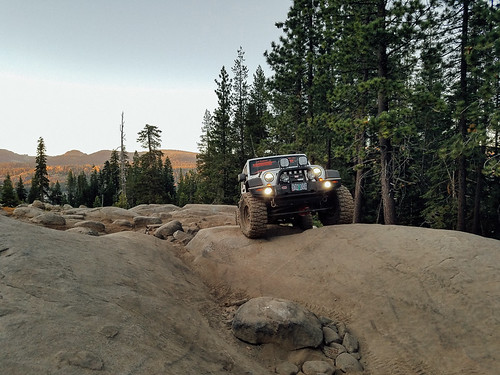 We finally arrived at Buck Island Lake, claiming a campsite pretty close to the trail, before the dam. 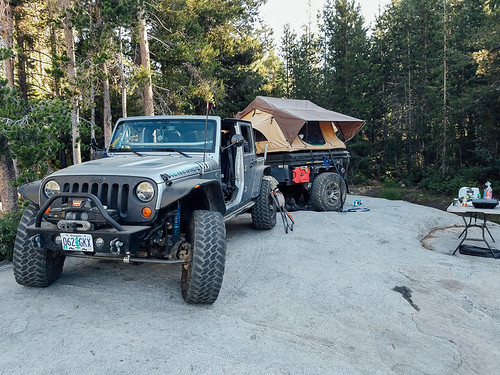 After a couple cold beers, we made some hearty spaghetti with Beyond Meat to fill us up before a chilly night.

Andy wanted to drive today, so I was able to walk alongside and take some photos.  We climbed over the dam, and the many challenging ledges along Buck Island Lake. 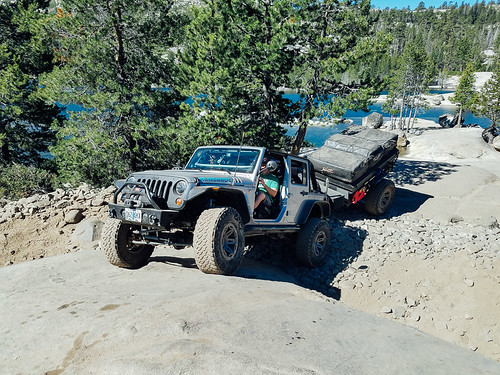 The heat was manageable and the dust was pretty low, which made this section of trail an easy day. 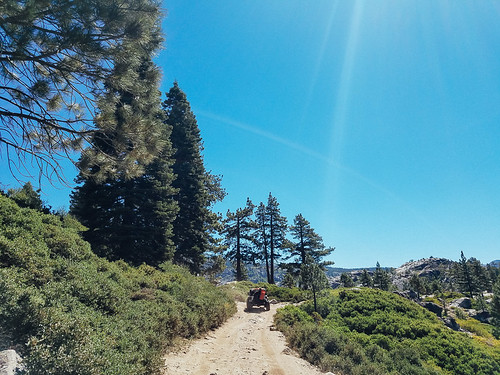 At the Big Sluice, Jesse tried to get a little cocky and ended up trading some paint to a nice big rock in exchange for a dent. 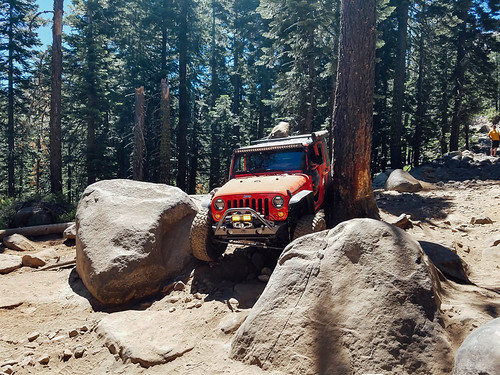 The Big Sluice was the most challenging part of the trail for all of us.  Just after I snapped this photo, Andy flipped the trailer for the third time.  Click the image to see a video of the flop! 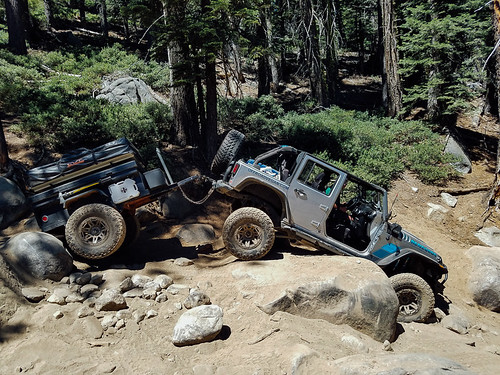 After Jesse sustained some minor body damage and my trailer took a nap, it was now Matt’s turn.  After a challenging line took a turn for the worse, he snapped his track bar! Click the image for video of the break! 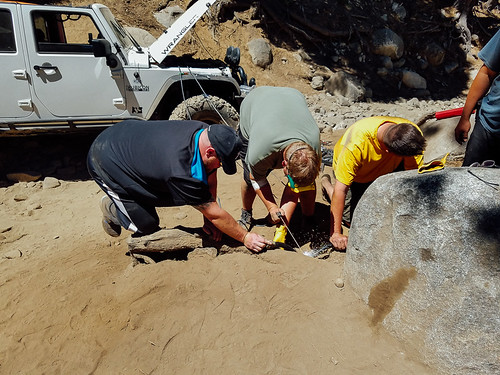 After limping out of the Big Sluice, we made our way over the Rubicon River and into the Springs. 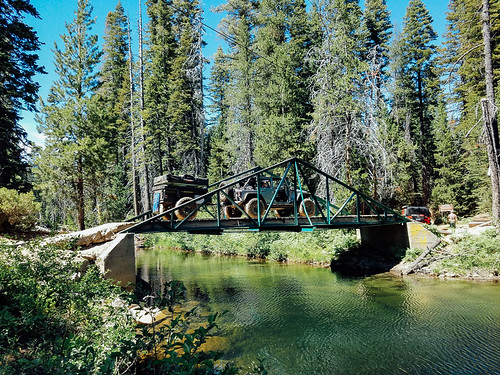 After passing through the Springs, I started to pray to the campsite god.  In hopes that our favorite campsite along the River was open and available.  As Jesse pulled ahead of the group to scout, he radioed back that the spot was in fact, taken.  The radio soon crackled to life again as he mentioned the spot among the pines was open!  A new site for us, and one we drool over every year.  Now, it was ours!

After some swimming and rope swinging, we started dinner.  Tonight it was Beast Burgers from Beyond Meat, with Daiya and baked beans. 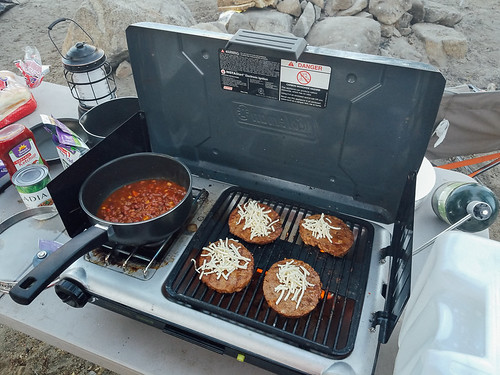 After Dinner, Landen and I ventured up the River to do some exploring.  It was a beautiful night! 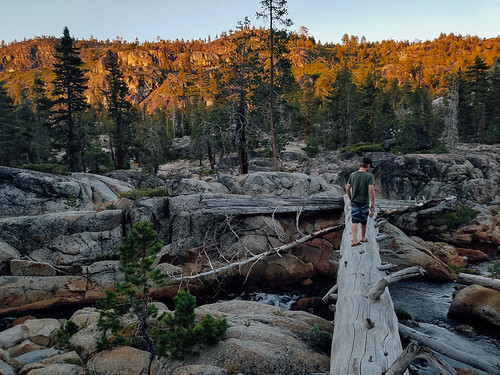 Finally, we all wound down around a beautiful fire with some cold beers, good stories, and the stars. 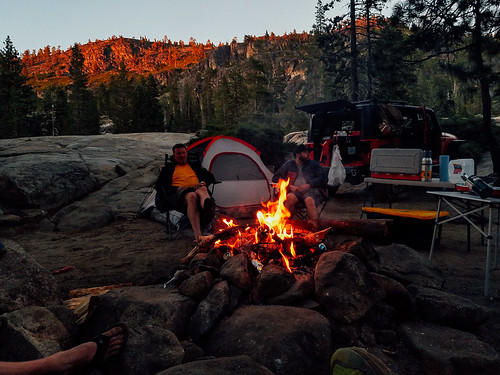 I woke up to the view of the pond out of my roof top tent from CVT.  Everyone started rustling, and after coffee we broke camp and planned our day around the infamous Cadillac Hill. 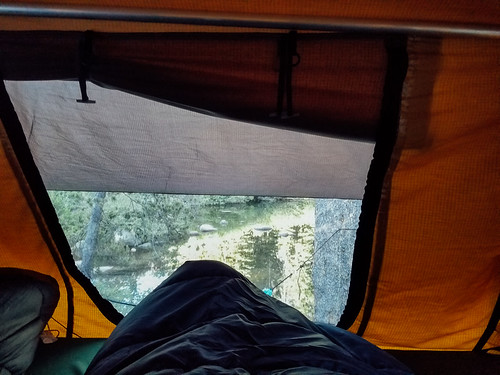 Sure enough, Cadillac Hill kicked our butts, but for the first time I did not need a winch with the trailer.  We all made it up without issue. 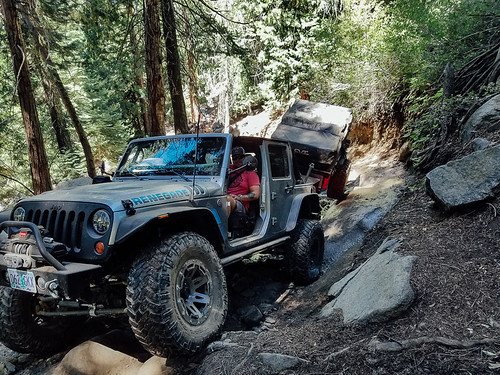 After Cadillac Hill, we made the way to Observation Point (I lost the images from my drone due to a broken SD card).  After Observation Point it was the long and arduous journey out to the staging area (my least favorite part of the whole trail).

After a quick air up we made our way to the Brewery at Lake Tahoe for cold beers and some good food (but they stopped selling the vegan burger!!!!! Nooo!!!!!).

This was another amazing trip on an epic trail.