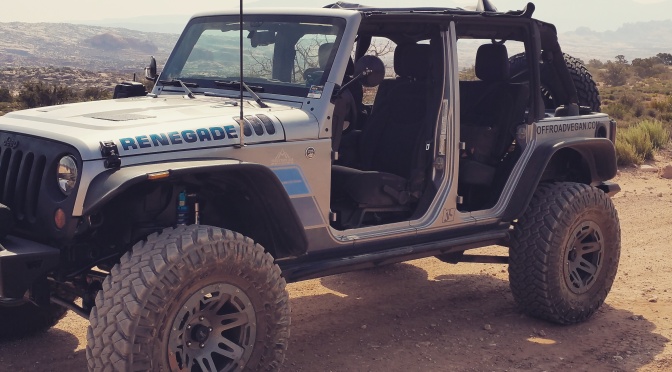 One of the biggest concerns I have had with the JK platform was under hood heat.  The engine bays (in both the 3.8 and 3.6 variants) are super cramped, and we push our Jeeps when offroading, especially in hot and dusty places like Moab or the Rubicon.

I was really excited when Rugged Ridge sent me one of their performance vented hoods to try.  This would be the perfect chance to see just what kind of a difference would be seen with a vented hood.

Before the Rugged Ridge hood, I considered a bunch of options. Starting with the cheaper end, I looked at hood louvers from companies like Gen Right and Poison Spider.  The biggest benefit to these, is that you do not need to paint your hood.

I am really glad I didn’t go this route, and instead installed the Rugged Ridge Performance vented hood.  Here is why.

Styling: The RR hood just looks awesome.  One of my friends mentioned the styling looks borrowed from the A-10 Warthog.  The hood has an eye-catching shape that features a “bulge” that runs across the front of it, which really breaks up the flat and boring MOPAR version.

The metal heat vents on the top are a parallelogram shape while the vents on the side are recessed and rounded.  These vents are easily removable to be painted a highlight color or even bedlined.

Install: Installation was also a breeze, with the fitment perfectly matching the stock mounts and stock hardware.  I will feature an install post soon.  Instructions, while simple, were adequate. Install took about 1 hour.

Function:  On my first day of city driving, Portland was experiencing 70+ degree temps in March.  I immediately noticed my temp gauge that was usually parked right in the middle, was sitting a hair under its normal spot.  So the gauge reflected a true reduction in under hood heat.

I also noticed, while waiting in line at a drive through, actual heat waves rising out of the hood. This was something new, so I actually could see the heat escaping from my engine bay.

Last, when I opened the hood I noticed a sharp reduction in the heat that was typically released (almost like opening an oven after it has heated up) in my face.  That blast of hot air was no more.

Design: One of the nice little benefits I did not expect was the amount of light that the hood vents let in when working under the hood.   It was almost like having two skylights making under hood work a little nicer.

Packaging:  I typically don’t mention packaging in my reviews, but shipping a hood without damage is a daunting task.  I was pleased to see precision cut foam blocks holding a well-protected hood inside a sealed, heavy duty cardboard box from RR.  There were no excessively wasteful shipping items (i.e. peanuts, etc) which was nice.

Vent Fitment: I really struggled with the install of the top vents.  First, they use threaded clips that snap over the vent and a lip on the underside of the hood.  These clips seem to scratch my fresh paint and do not allow for a simple, flush install.

Also, what appears to be a manufacturing defect shows significant, non-uniform gaps where the vents meet the hood.

I contacted Rugged Ridge about this issue, and it is a known problem however my instance seems severe.  Rugged Ridge sent me photos of their own Jeeps and while there were some vent gaps, they were minimal.  They also advised that I could try to “bend” the vents to make them fit better.  However I do not want to keep sliding those clips on and off over that fresh coat of paint.

Rugged Ridge also told me to look for a new product announced at SEMA 2014 – updated hood vents.  These vents sit on top of the hood, rather than “sit” flush with the surface.

I can easily live until these new vents hit the market in early May 2015 to fix this fitment issue.

Installing with my ARB compressor: This is not an issue with the hood.  As we all know, manufacturers cannot factor in every part combination of our Jeeps when designing products.  I had a slight conflict between my under hood ARB Twin Compressor and the MORE mount.

The fix?  I had to cut a small piece out of the ARB compressor cover, in order to let the air nipple lay flat.  This resolved the issue where the nipple was contacting the hood.

As Summer starts a very early presence here in the Pacific Northwest, I am really happy to finally have a heat reduction hood on the Jeep.  The hood from Rugged Ridge is worth the cost and time to have it painted (~$350-$400).  From unique styling that sets the Jeep apart, to actual, marked reductions in under hood temps, it is a great addition to the Jeep.

I am also really excited that RR has manufactured new vents for the hood.  They recognized a manufacturing issue (compound forming) and changed the approach on how to fix it.  I hope they continue to design new vents, so Jeep owners can find more and more ways to further tailor the look of their Jeeps.

I look forward to pushing the Jeep a little harder this Summer, knowing it’s a little cooler.

**FULL DISCLOSURE: Rugged Ridge provided the hood for the purpose of this review.  I paid a local shop for painting. It did not influence, in any way the outcome of this review.