On a recent trip to Anaheim, California, I escaped the hotel and went off the grid in hopes of finding a good vegan place.  Happy Cow did not disappoint and I ended up finding Mitasie 3 in Huntington Beach. 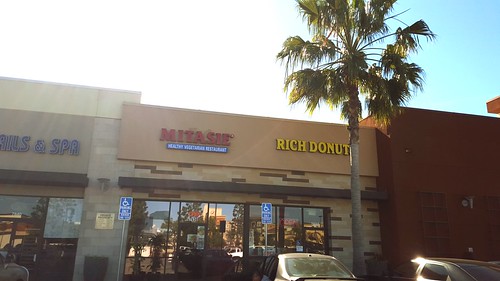 We pulled into a small, non-descript strip mall and were quickly seated.  I was a little surprised at the dark interior (no lights were on which made me think they were closed) but it was a pretty warm day out, and the natural light worked just fine.

The menu is extensive and deciding on our lunch proved difficult – I wanted to order so many things! We finally boiled it down to 3 items for lunch.

Mike and I started with an order of the fried rice, which was served quickly.  The presentation was great, the rice was perfect.  The tofu was cooked very well, and the veggies were crispy and full of flavor.

As an entree, I pulled the trigger on the sweet and sour chicken.  Mike took a riskier route – the Salted Pepper Crispy Soy Shrimp.

The sweet and sour chicken was very delicious.  The sauce made the meal – which is pretty common with a sweet and sour dish.  The chicken “chunks” were crispy and well prepared.

Mike LOVED the soy shrimp, which was a victory for me.  He is not a vegan (far from it) and when he chose that plate, I was afraid for the worst.  The shrimp were crispy and breaded to perfection.  The associated chili sauce had a ton of heat, and I left it on the side but Mike ended up wolfing most of it.

And, while the menu from the Vegan Tiramisu Company on the table tempted me with a sweet end of the lunch,  I opted against it.  My flight was leaving soon and I didn’t need to wobble around LAX.

In the end, our meal at Mitasie 3 was phenomenal and I will definitely be back!