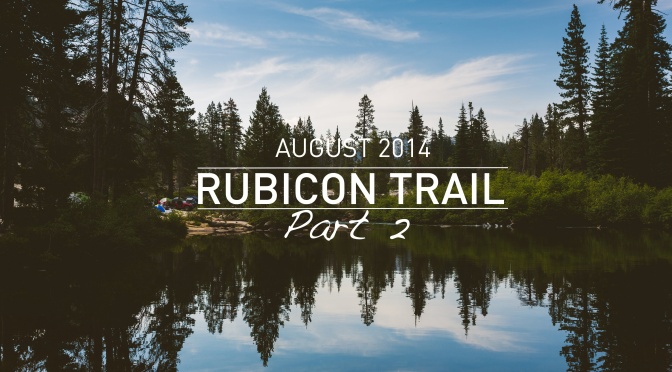 Miss part one?  Find it here!

Everyone slowly woke to the familiar smell of coffee and the sound of hushed voices.  Once caffeinated and packed up, we decided to cross the dam and take a look at the helicopter crash site.

Just days before we arrived, a chopper that was ferrying supplies for the Jamboree crashed on the shore of Buck Island Lake. Fortunately, everyone survived.  It was still a very surreal scene, with bloody clothes visible and even the pilot’s headset resting in the cockpit window frame.

Once we returned to the campsite, we left Buck Island Lake, quickly encountering a fun series of ledges right out of the gate.

While Jeff took a more challenging line to the right, the rest of us stayed left.  The trailer made it around the dogleg turn, and we all made it up without much issue.

As a group we were pretty fortunate when it came to trail damage. But, on the previous day, one of Jesse’s expensive Icon shocks was smoked by a rock, and today would see the demise of the second.  As no one happened to bring along a spare, poor Jesse and Thana had a pretty bouncy ride for the rest of the trail.

The trail soon dropped us at the Big Sluice – traditionally one of the hardest parts of the Rubicon (devoid of a bypass) but the section has been neutered in the past few years.  It still poses some serious challenges and interesting lines.

Here is some raw video of my Jeep and trailer navigating a fun line, with Chad’s expert spotting.  Apologies for the brake noise!

Once we all cleared the grips of the Big Sluice, I popped out of the forest into a turn that placed the trailer on some wet, slick rock with the potential to flip it if it slid.  Thankfully, Robert lended a safety winch line and I easily dropped down without issue.  It was one of those instances where it probably would have been fine, but the consequences of being wrong were pretty harsh.  So, playing it safe was preferred.

The next section was a pretty serious rock garden.  It was in this spot on last year’s excursion that Chad blew his bead on a front tire.  The granite boulders here are formidable, and careful tire placement is mandatory.

When the trail turns left at the bottom of the pile, your passenger side tires are very close to a precarious drop off, and tree scars tell the stories of others that got too close.

Shortly after this section, we all crossed the Rubicon River bridge and made our way into Rubicon Springs.  The place was packed, in preparation for the Jamboree.  We passed through and claimed our campsite for the day at the base of a huge granite slab, right on the river.  We found this spot last year, and I was really excited to stay here.

I quickly whipped up some of my favorite trail sandwiches for lunch: the infamous Beyond Meat BBQ Chick’n Sandwiches.  These are packed with protein, are easy to make, and taste awesome.

After a filling lunch, there was not much else to do but spend some R&R time in my hammock, and then take a swim in the beautiful glacial pond at the campsite.  The rope swing was a blast.

Another benefit of staying here is that it is actually private property.  Be prepared to pay $10 per night per vehicle, but the cost is worth it.  While the rest of California is drier than a popcorn fart, this place allows campfires.  We had a beautiful fire under the stars, reliving the stories of the day and enjoying some ice cold Oregon brews.  This is what offroading is all about – the friends you make.

We woke to a frosty Sierra morning and a cacophony of Canadian Geese that were probably just as hungry as we were.  With steam rising from coffee mugs, I made some breakfast burritos and we slowly broke camp.  Another dip in the pond acted as both an additional caffeine shot and a bath.  It might have even helped with the IPA-induced headache from the night before.

As we headed back to the trail the ominous Cadillac Hill still loomed in the distance.  Cadillac climbs about 1200 feet in a half mile.

When we first planned this trip, and I committed to bringing the trailer, the only spot that really concerned me was the tight corner at the base of Cadillac.  Now it was finally in front of me and I had to tackle it.

To save time, I opted to winch after a couple of failed attempts.  The trailer was anchoring the Jeep and I just couldn’t get enough momentum to clear it.  I was still stoked though, as this was the first time my winch was deployed, on the entire trail.

After a couple more winch pulls, we all cleared the final challenge on the Rubicon trail, and grabbed a quick lunch at Observation Point.

Many people think Observation Point is the end of the trail; not true.  There are actually about 5 miles of slow, bouldery trail that lays between you and the hotel.  Eventually, we ended up at the staging area where high fives were exchanged, and tires were aired up.

Back on pavement, as our caravan of weary vehicles drove on with the dust of another Rubicon trip blowing off the Jeep, I realized just how awesome times like these are.

Some people will never know why I spend so much on gas, or why we spend so much time on our Jeeps.  And for some, they will never know the bliss of beating a hard line, or spotting a buddy through a bad spot.  Or, pushing yourself and your Jeep to the point of failure, only to come out a stronger team in the end.

For them, that is sad.  For us, it was amazing.