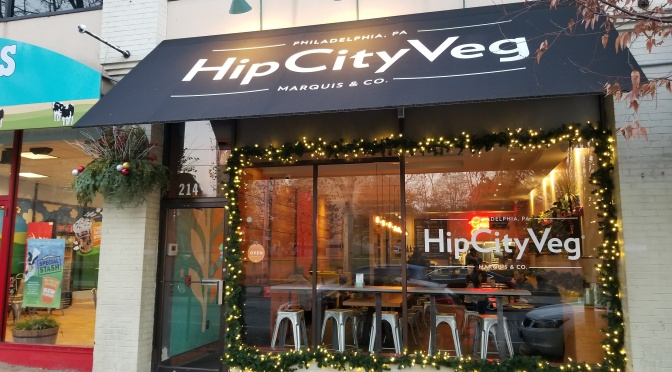 Shortly after landing at PHL, I hit the road and had dinner at Hip City Veg on South 40th.

The spot was super nice, and had seats in the huge front window for epic people watching.  I arrived later in the day, even after dinner, so the place was pretty empty.

The next challenge was to choose something from the menu.  It isn’t a super expansive menu, but there was a decent variety of things.  After hearing rave reviews of the Disco Chickin Sandwich, I ordered one up.  I added a side of sweet potato fries, and the mysterious black bean dip.

My name was called and I grabbed the tray from the counter. My sandwich was wrapped in a white paper, and it was all messed up.  I am not sure if the sandwiches are pre-made and they had to open the paper to remove my onions, or if my sandwich had some other fate.  Either way, the bun was beat up as well.  With a nod to Farva, I dug in anyway.

The grilled chickin was of the Gardein variety and was cooked perfectly. Overall the sandwich was awesome (the bent up bun in a non-issue for me). I am not sure how they do it, but the tempeh bacon was fried and greasy.  And really good.  Sorry for the gross pic, but this shows the bacon status really well.

The fries, however were amazing. And that bean dip?  Perfect for the fries.  I actually barely touched the ketchup safety net I asked for.

I grabbed a chocolate shake to go, and it was really good as well.  Basic, but good.  They use Soy milk (I think she said Silk), and some ice cream that “is like the Trader Joe’s vegan ice cream.” I have not tried that to correlate the story, but in the end the shake was really good.

The next day I needed a close lunch stop, and decided to come back again.  This time, the place was PACKED!  I was able to order the Philly Cheese Steak sandwich and a small table.

The sandwich was really good, with chargrilled mushrooms and sliced up seitan.  I am not sure if sandwich management remains an issue here, but once again my sandwich looked like someone played football with it first. The bread even had a chunk missing like someone took a bite out of it.  Weird.

If you order the Philly, be sure to have plenty of napkins at your table, lest you walk across the restaurant for napkins, looking like a messy-handed zombie.

If you are visiting Philly, a stop at Hip City Veg is a must.  Hopefully your sandwiches are in better shape than mine!