We all know the stock JK headlights are an embarrassment.  So one of the first things I did was replace them with the infamous (and oft used) Trucklite LED headlights.  But as the technology has improved in the space, I never thought to see what else might be on the market, or what the improvements could be.

So I called Northridge 4×4 and ordered a pair of the KC HiLites Gravity PRO LED headlights for JK.  See my unboxing here.

Of course, install was a breeze.  After removing the grille and Trucklites, I easily replaced the headlights.

One of the first things I noticed, is that the delay between high and low beam is a lot shorter than with the harnesses and Trucklites.  I would often get flashed by oncoming traffic as the extra electricity in the system was burned, before the low beams came on.  So that is nice – no more being flashed by impatient drivers.

The second thing I noticed is that these give off a really bright, crisp white light with a VERY pronounced cutoff.  Which, when driving the dark roads of Oregon’s mountains, I appreciate. You really need to see these lights to appreciate it. 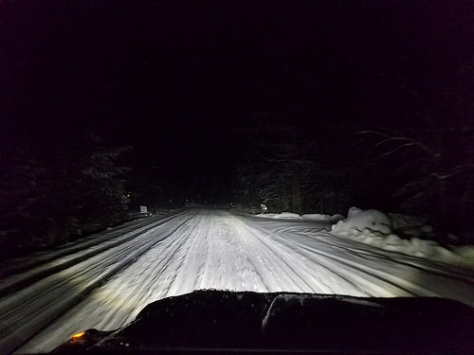 But there is also a “purple fringing” you will notice on street signs and other things as you drive.  It isn’t really an issue at all, but something that is noticeable.  I assume it is due to the massive LED lens casting some different light on reflective surfaces.

I also like the new look on the front of the Jeep. The Trucklites seem old hat – virtually everyone has them now.  These huge and highly reflective silver reflectors really brighten up the front end of my Jeep, and give it more of the stock look.  Design-wise I can’t help but see flowers (the LED looks like the center of a black-eyed Susan with petals fanning out), but overall they look really nice and offer something unique. 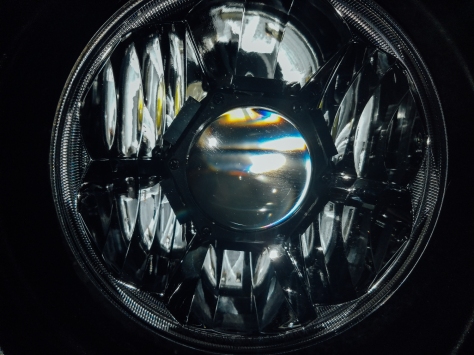 How about snow?  Well I drove during one of the worst blizzards in the last few years and had ZERO issues with icing.  I did not wax them or anything. These do not have heating elements like the new Trucklites, but I don’t think they need them.  I didn’t check with a thermometer, but I feel like they do give off a little heat.  But again, no issues at all in the snow for me.

The only real issue I have is radio interference.  On certain radio stations, the low beams will completely static out the radio.  It is not a wide spread issue, more of a nag, but still something I wanted to address.  Video is here (pardon the Ginuwine, it was Flashback Friday..you know how it is).

Overall, the build quality is good which is to be expected on a $700 set of lights.  The machining on the backs seems really well done, the lenses have held up very well with no scratches or dings.

I am looking forward to testing these out on the trails and campsites of Summer 2017, but so far I am really impressed and happy with these lights.

**FULL DISCLOSURE: I purchased these lights from Northridge 4×4 when they were on sale, but I paid the full sale amount and was not compensated for this review.